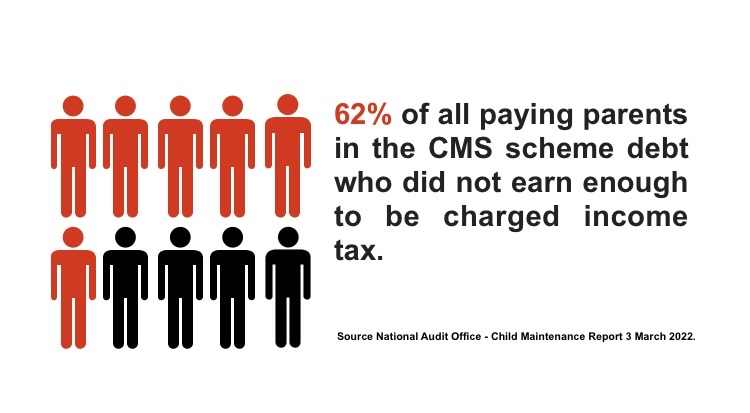 FNF’s view is that until the Government have a cohesive strategy for separated families and until Child Maintenance is affordable and fair:

Today (3rd March 2022) the National Audit Office (NAO) published their report into value for money of the Child Maintenance Service (CMS). FNF are credited with our contribution to NAO's investigations. The report can be downloaded here.

The CMS service costs taxpayers £322m a year. At a cost of 36p for every pound received by parents, it represents poor value for money.

FNF welcome NAO’s key, unprecedented, recommendation that DWP assess affordability and report to Parliament on whether new legislation is necessary. Contrary to popular belief about parents avoiding their financial responsibilities towards their children, the NAO reports that almost two-thirds (62%) of paying parents with Child Maintenance (CM) arrears have incomes below the tax threshold. As FNF have been saying for many years, there is a problem of unaffordable assessments under a fundamentally flawed Child Maintenance formula. The NAO also identifies that payment thresholds/bands have not been reviewed for inflation since 1998 and ‘can conflict with wider aims of the welfare system’.

We note that in 2019 the Social Security Advisory Committee (SSAC1), a statutory government agency, identified key flaws in CM legislation and recommended that that the government address the lack of a ‘clear strategy for separated parents’. We agree with this. Unfortunately no such strategy has been developed.

FNF urge the Government to formulate a coherent strategy for separated families and urgently make parliamentary time to amend legislation. That legislation must ensure:

Until these fundamentals are addressed, CMS will continue to fail and Child Maintenance arrears will continue to grow. No matter how much enforcement measures are strengthened, it is not possible to get blood out of a stone. NAO observes that CM arrears are increasing by £1 million a week and will reach £1 billion by 2031. FNF consider that this estimate is conservative as it does not take into account the effect of inflation between now and then on affordability.

There is no tangible evidence of these issues being addressed by DWP. By integrating the formula for Child Maintenance into primary legislation, Parliament have made it impossible to even make sensible annual adjustments based on inflation, without changing the law – even when that law makes no sense. New legislation must be properly formulated – the present law is not.

“We welcome the National Audit Office’s report on value for money of CMS, particularly in relation to addressing legislation in relation to affordability of assessments. Children need the love and care and financial support of both parents. The NAO report is a damning indictment on the failure of the Government to create legislation that does more good than harm. Tens of thousands of parents are falling behind with their child maintenance payments, not because they won’t pay, but because they can’t. The NAO report comes as Minister of State for Justice, Dominic Raab MP, has called for radical ideas to take parents out of family courts. The issues of Child Arrangements after family separation and Child Maintenance are often inextricably linked. The US Congress identified that involved parents also contribute more to the upkeep of their children . A coherent policy that places as much store on supporting and enforcing shared parenting arrangements as on financial provision will pay dividends. Current policies fail to do this and fuel conflict.”

For further information, quotations from our service users or infographics please contact us by email at media@fnf.org.uk or leave a message on 0300 0300 110.

Further information on our views on CMS and other aspects of family justice see our Strategy for Separated Families and Protection of Children and Adults.

FNF is the leading registered UK charity providing information and support on shared parenting issues arising from family breakdown, and support to divorced and separated parents, irrespective of gender or marital status. FNF is NOT a fathers' rights group - we support the best interests of children - namely mature and collaborative parenting by both parents - an objective which is inadequately promoted in the family court system and associated services.

FNF receive approximately 25,000 calls a year to our Helpline and thousands more rely on our local branch network and online support.