Non-Molestation Orders - What are the dangers?

Warning - Breaching a Non-Molestation injunctive order (NMO or Non-Mol) could lead to your arrest and even your imprisonment!  Not to be taken lightly.

Non-Molestation Orders are injunctive court orders designed, rightly, to protect applicants from abuse e.g. by preventing someone from visiting a particular location. They are civil orders, non-compliance of which is a criminal offence. Unortunately, as well as being obtained legitimately, it is not uncommon for some people to abuse them for a range or reasons, including being a relatively easy gateway to scuring legal aid in family proceedings.

Media reports during Covid19 are saying that there have been rises in reports of domestic violence as families self-isolate at home. It is likely that this will be reflected in a large increase in NMOs granted in Q2 2020. While many NMOs obtained will be for valid cases of domestic violence, where protective measures are needed, many others will be bogus applications which in the words of Sir James Munby at FNF AGM in 2014 "I think one thing we have got to recognise and did not recognise institutionally until too recently is that a wrongly granted without notice order sets the tone of proceedings thereafter".

Below are some tips you might consider in the face of being served one of these orders. These are followed by further information on the recent dramatic increases in NMOs. Simple guidance (not advice) to any FNF service users who may be served an 'ex-parte' NMO order or 'with notice' NMO application during the Covid19 crisis:

1. Read document FL700 to fully understand what an NMO or Occupancy Order means and the implications if the order is breached.

2. Ask the court for a copy of the FL415 notice of service form to confirm lawful personal 'service' of the NMO / Occupancy Order papers by process server or court bailiff. If the applicant has applied for an Occupancy Order, the FL415 should also confirm whether the papers have also been lawfully served, as required, on any mortgage company and/or landlord before the court hearing. There is a Protocol for process servers: Non-molestation orders that must be followed and if it is not the order cannot be enforced. You can ask for the FL415 before or at the 'return' hearing.

The return hearing shuld normally be no more than 14 days after the order is made. If the order at an ex-parte hearing is to last longer than 14 days then the law says, as stated in Practice Guidance of Sir James Munby when President of the Family Division, that the return date must be set within that time.

ACTION - We are hearing that this is not always happneing during the current Covid-19 crisis. If this is your experience, please let us know on admin@fnf.org.uk with NMOs in the subject heading.

3. If ex-parte NMO has been granted, many people find it useful to apply for transcript of the ex-parte hearing with EX107 form. It enables you to find out what was said at the hearing by the applicant and may assist you if you are challenging the grant of the NMO. Transcripts are not free, but as most NMO hearings are fairly short, may still be affordable. You can ask for a quotation first, based on the length of the hearing. If you are on benefits you may be able to obtain funding for the transcript using form EX105.

4. If an ex-parte NMO has been granted, that you conisder to be unjustified or based on false allegations, you may apply for it to be revoked with FL403 form (free application).

5. When you attend the ‘return’ or ‘with notice’ NMO hearing, it could help to ask for a full ‘fact finding hearing’ into the domestic violence allegations made. The onus will be on the applicant to prove or justify their allegation and the need for the injunction order for it to remain in place.

6. Applicants’ lawyers sometimes say that they will seek costs against you for challenging the injunction order. If you have a basis for believing that your challenge is reasonable then it is unlikely to result in award of costs against you.

7. Sometimes it is appropriate for you to offer to accept an under-taking as a replacement for the NMO i.e. you would commit to not doing certain things. It is possible to also ask for ‘cross-undertakings’ from the applicant i.e. ask that similar commitments not to do certain things are made by both parties.

Please note that NMOs are often used as a route to obtaining (further) civil legal aid for child arrangement proceedings, if the applicant also passes the four means tests for this. Where the respondent alone makes such an undertaking, this will not affect their right to legal aid. However, they will not be entitled to it if there are cross-undertakings.

8. You may wish to considere bringing to the court's attentions the concern about the large increases in NMOs in selected court in England especially if your court is in the top 10 below.

The Family Law Act 1996 introduced injunctive orders called Non Molestation Orders and Occupancy Orders which if breached by the respondent can see them arrested and prosecuted with punishment of jail sentence up to 5 years / or a fine up to £5000. The Ministry of Justice has been releasing FOI data on these orders granted since 2003:

From 2009 to 2013 the trend was a fall in the use of the injunction order.  However changes made to Legal Aid under the LASPO Act 2012 on 1st April 2013 saw the need for evidence of domestic violence in order to obtain Legal Aid for family court proceedings.  Since then, injunction orders have been the most popular domestic violence allegation used to get legal aid. There was rise of 20.9% in NMOs in England and Wales from 2011 to 2016 when the rise in orders flattened out.  However, changes made to police bail under the Police and Crime Act 2018 on 3rd April 2017 have seen further rises due to police forces in England and Wales not extending police bail at 28 days / 3 months stages as required by the bail legislation. Instead, complaints of domestic violence are now often referred to national and local domestic violence organisation to obtain NMOs from family courts in order to replace the police bail. The highest number of NMOs were granted in Q3 2019 of 8,251; 31,183 in the whole of 2019, an increase of 4,032 on the previous year.

In 2019 there were 6,751 more NMO orders given than applications made as orders are sometimes given as part of child arrangement proceedings. The reverse happens with Occupancy Orders as there were 2,957 fewer orders given than applications, due to balance of harm test that has to be applied which requires the court to balance the harm caused to the applicant, respondent and any relevant children if the order were or were not to be made.

Freedom of Information data from the Ministry of Justice suggests that the legal aid firm that is getting the most NMOs in England is National Legal Services Ltd who made a total of 3,565 NMO applications for their clients in 2019. Another organisation, the National Centre for Domestic Violence claim to be responsible for assisting in the obtaining of 35% of such orders.

The rise in NMOs from 2011 to 2019 is 59.5% however a look at the regional data shows that for the same period the rise in NMOs in London has been just 5.2% but the Midlands the rise has been 166.4%. FOI data obtained from the Ministry of Justice shows the top 10 courts as regards increases in NMOs over that period are: 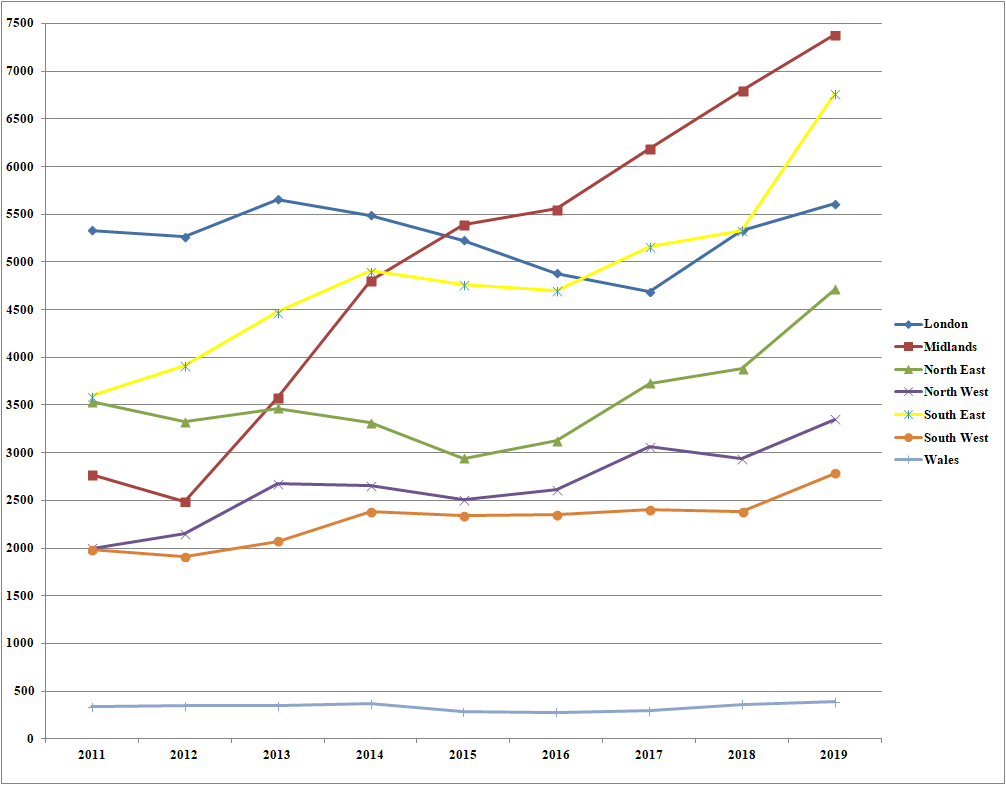 We thank FNF volunteer, Richard Nixon, who has gathered the information in this article and complied relevant data over many years.