It’s Father’s Day again. A day to celebrate fatherhood, but a day too, on which many of us may not have the good fortune to be with our fathers or our children.

As every year, we want to highlight a positive story to send some hope to all those dads who are unable to spend this day with their children. Edward (not real name) got in touch with us this year and offered us his story of how he successfully managed to get residency (custody) of both his daughters. 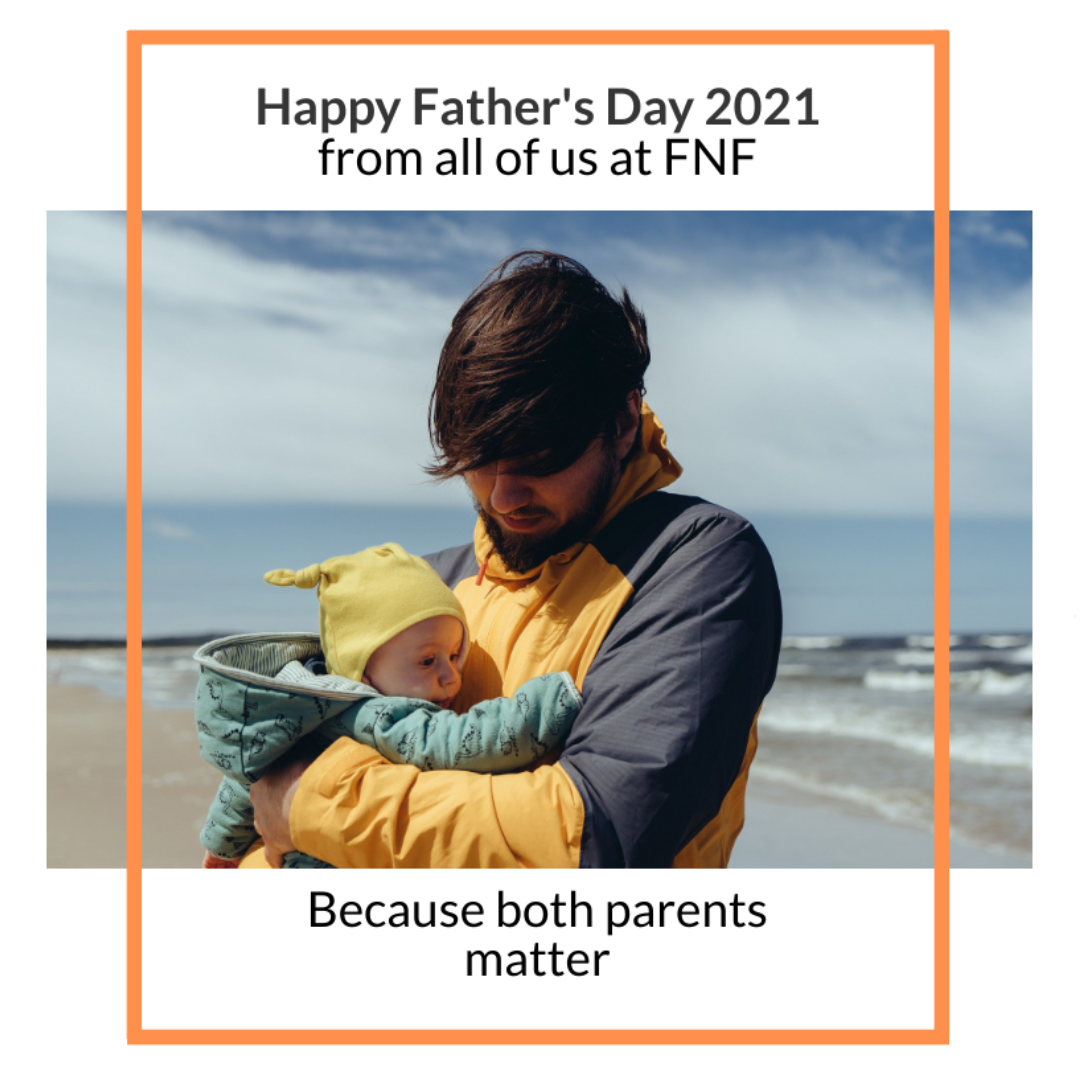 His story started when he separated from the mother of his children in December 2012. At the time, his youngest daughter was only one year old and the oldest one was four. The month after, Edward left the family home and became homeless. Luckily, he had a friend who offered him a sofa for a few months before the British Legion, where he was working as a storeman for the Ministry of Defence, offered him a housing association flat.

Getting the flat made a huge difference in his life, as this meant he was able to see his children again.  The mother to his children would not allow him contact until that moment. However, that flat was only a one-bedroom flat, so he knew he needed a bigger home if he wanted to have the children to stay and get shared care.

In March 2013, Edward attended the launch of the FNF East London branch and the month after started studying Family Law at the Charted Institute of Legal Executives (CILEX) through a distance learning course. A couple of months later, he started mediation and in June of the same year, he started seeing his daughters for 5 hours on a Saturday.

As there had been earlier allegations and a Non-Molestation Order (NMO) ‘shuttle’ mediation sessions were arranged monthly, but after 4 sessions, funded by legal aid, in August 2013 the contact collapsed again following further allegations against him. The month after, Edward got a second NMO, immediately after the first expired.

In October 2013, after he studied Family Law for 6 months, Edward felt sufficiently confident to file an application for child arrangements to see his girls again. He also managed to move to a 2 bedroom flat next to where he was living through the support of his housing association.

The first hearing was in February 2014, but nothing really happened as the solicitor couldn’t attend. The second hearing was a couple of months after. Although a lot of allegations of domestic abuse were made until that moment, contact was agreed and the children stayed with Edward every other weekend from Friday to Sunday.

His original application was for shared 50/50 care, but the mother did not agree to that. She thought he wanted shared care to stop paying child maintenance, but he only wanted to spend time with his kids. Interim arrangements agreed at court were for alternative weekends, but continued to be difficult. By the third hearing (June 2014) he changed the filed child arrangements application (on a form C2) to a “live with” application. Edward basically went to ask from 50/50 care to be the resident parent.

During the fourth hearing in July 2014, a CAFCASS section 7 report was ordered because of the nature of the new application. They were meant to respond to the Cafcass report about a week before the fifth hearing, which was September 2014. After a long break because of the report, Cafcass recommendation was for the father to see the children every other weekend and half school holidays, and the children to live with their mum. As Edward knew about family law and learnt other things through FNF East London, he decided to challenge that. He wrote to the kids school, engaged with them and got their school reports.

The mother wanted the father to see the kids every other weekend and Cafcass wanted him to assist her whenever she wasn’t able to care for them due to other work commitments that she had. He felt like he was going to become a babysitter whenever mum decided, based on irregular demands on her time.

He noticed there were some discrepancies in the Cafcass report. The biggest one was the 97% school attendance when it was actually 63% due to a period when the children were ill for about a month. It made him feel that Cafcass were not presenting accurate information in order to support the position they were adopting.

In the report itself, there was nothing bad about him and the allegations made did not stack up. There was nothing actually showing they weren’t both capable of caring for the kids. Cafcass also said a shared care arrangement wouldn’t work only because of the acrimony between the parents.

The judge decided to rule on the case after receiving evidence from both sides. Dad’s evidence was that he had a 2 bedroom flat and a letter from his employer, agreeing to flexible working arrangements if a court order was produced. At the final hearing the judge decided the children’s interests were best served if they lived with their father and spent time with their mum – that he was best suited to take care of them.

After the final order in 2014, the mother carried on with other allegations of threats at handovers as she was hoping to get the kids back into her care. He had to go to court to ask them to change the handover for his own protection. From that moment, they only started to meet in public places for handovers and when they had to.  Pick-ups for handovers of the children were from the school on a Friday and drop-offs back at school on Mondays, avoiding tension and stress for the children and parents.

Subsequently, the mother continued to make fresh applications and in 2018, he asked the court for a Section 91(14) Order, preventing either party from making further applications to the court without seeking permission first. This was granted to give the children (and parents) a break from litigation.

From 2020, the relationship changed a lot. She seems to be a bit more receptive. She now sees the kids 3 weekends per month because he grants her extra time. He also told her to just send him a text whenever she wants to see them.

Things really changed for the better. Mainly because he got primary care and was always willing to collaborate in the children’s interests. When she had he children, it was all about power and control rather than putting the children first. When she realised nothing was going to change she calmed down and the children are now happy and able to enjoy their family life with both parents, grandparents and wider family.

We would like to use a quotation from, Ian Findlay, FNF Trustee and FNF East London Branch Chair:

“It’s a marathon not a sprint” You gotta stick to it and do what’s best for the children!

Edward and Ian agree that:

“There are no losers or winners, the only ones affected are the children. I don’t consider myself the winner. The only winners are the children who now have a relationship with both parents”.

Every year thousands of children needlessly lose their fathers from their day-to-day lives, often aided and abetted by an adversarial family justice system that is not fit for the purpose of resolving issues between separating parents. With almost half of families separating before their children leave school, this is creating a public health crisis of epidemic proportions and the coronavirus pandemic is making it worse.

Our experience is that, where one parent is determined to undermine their children’s relationship with their ex-partners, the longer the period of time when children are not seeing both parents, the more difficult it is to get things going again and the more damage is done to the children. In the more extended cases, children respond by claiming to reject a much loved parent, essentially in order to protect themselves from the disapproval of their other parent.

However, even in the most difficult cases, such obstruction can often backfire, at least in the long run. So as children all over the country celebrate Father’s Day, our thoughts are with all of them and their dads.

Our thoughts are especially, however, for the children and dads who are unable to enjoy this day together. Edward’s story reminds us that the bond that is there is strong and cannot be destroyed by ill-will and inappropriate parenting alone. The truth often outs in the end and therefor, for the sake of your children, you should never give up!

For your children, every day is Father’s Day and that is why we are here! Happy Father’s Day 2021 from all of us at FNF – because both parents matter! Our Helpline can be reached on 0300 0300 363 – ideally between 6pm and 10pm Monday to Friday.

If you are not already a member, join us or consider making a donation to enable us to keep going and do more!